Animal perception is a much more difficult subject than our own as we can never really get inside the mind of another species. We can only infer perceptual capacities from a creature's responses to observed or experimental stimuli. 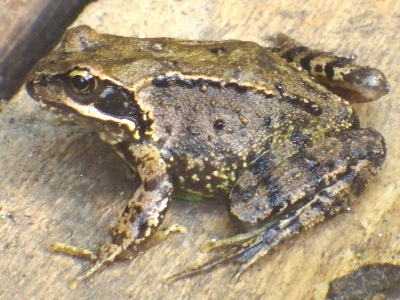 We know, for example, what shapes and movements in the frog's visual field elicit certain behaviours in the frog, but we'll probably never find out how a frog actually experiences the world. But we can determine what visual stimuli the frog responds to. Not surprisingly, most of a frog's visual perception seems hard wired to facilitate the catching of flying insects. It apparently can't register objects that are stationary or move very slowly, which is why I was able to get so close to the one in the photo.So, sadly, the frog prince remains a myth, as the creature's brain is simply not sufficiently complex to cope with the mental activity of even the dumbest young monarch. But the higher up the animal tree we go, the greater the difficulty we have in understanding animal perception, as although the responses of very simple creatures are observably more or less hard wired, once an animal has a brain capable of even the most basic kind of thought processes we recognise as such, the question of what it's thinking adds a further level of complication to the problem.
However, as wild soundscape recordists we're most interested in not affecting the behaviour of the animals we want to record. To avoid sending any signal that may elicit the fear response is therefore our primary goal, and in general that's fairly simple to achieve by remaining unobtrusive, still and silent. But "unobtrusive" can mean more than just trying to hide somewhere. Even if an inherently nervous animal such as a rabbit may hear you or see you, it will not be concerned if you don't look like a threat. Not looking threatening while remaining visible can often be a lot easier than hiding completely, so it's important to understand the danger signals for each kind of creature. To some extent this can be accomplished by studying the habits of the animals that hunt them as prey, but you also need to accumulate experience of things you might do that look to the nervous animal like the predator's behaviour. Often it will look nothing like the predator's behaviour to you.
Many animals learn from their local environment, developing perceptions that support their survival. So in a Scottish deer forest, the deer may be much more sensitive to human presence, as they have learned it signals danger. In urban environments, continuous background noise and even occasional loud noises such as passing cars and planes flying over are apparently ignored by animals. But they may still be very attentive to anomalous noises.
House sparrows are notably insensitive to sounds other than sharp cracks or bangs. But they fly for cover if they see the slightest movement within a few yards of them. They even cause each other to take flight, but they usually return very quickly. So the only way to leave them undisturbed is to be completely still for longer than their typical panic attack lasts - eventually they will return and ignore you. Some other birds such as ducks and crows are less sensitive to movement - you can approach them slowly in the open as long as you don't flap your arms or stare directly at them. All they generally do unless seriously alarmed is back off as you approach too near to keep a quite species-specific minimum distance between themselves and you. Robins sometimes come right up to you of their own volition. I had a recording of bees spoilt one morning when a robin landed on one of my microphones and bounced up and down on it for a while, staring at me cheekily at a distance of a couple of yards.
It's widely believed that at least some birds can count. "The Boy's World" published by Blackie, London & Glasgow, UK in 1950 has an interesting short section (pages 315-318) that documents this and shows how to fool them. You walk to your hide with a friend wearing a mackintosh. Once you're ensconced, your friend departs dangling the mackintosh at arms length. Apparently, many birds conclude that both of you have gone. It does indeed work, but there's an alternative explanation. If you and your friend arrive walking close together, the silhouette of you both arriving and that of your friend departing with the mac at arm's length may look sufficiently similar to fool the birds.
So to be effective in the wild you need to know the individual habits of the creatures you encounter. That means spending a lot of time with them, observing and remembering while remaining undetected (or at least disregarded) - and you'll lose quite a few recording opportunities while you're learning the basics, but they're not wasted in the long run.