The traditional figure-eight is the simplest directional microphone - its diaphragm is completely open to the air on both sides. This causes it to respond only to the instantaneous difference in pressure between the two sides of the diaphragm. 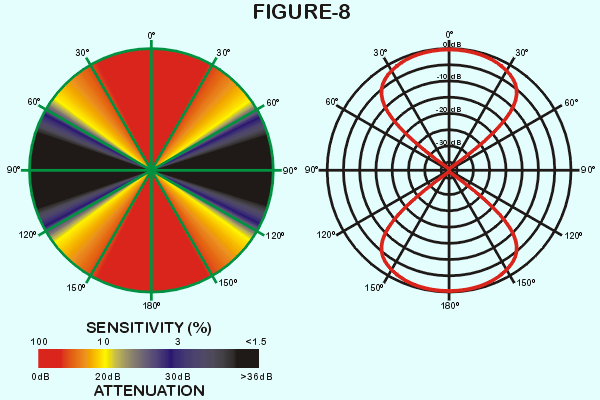 The classic ribbon microphone inherently has a figure-eight response, but figure-eight capacitor microphones are also made, some of which are purely mechanical like the ribbon microphone while others use internal electronic circuits to create the same effect by processing the signals from two separate diaphragms.
The resulting pickup pattern consists of two highly sensitive regions about 60° wide on opposite sides of the microphone. The sensitivity falls off pretty sharply outside these limits. and sounds arriving at right angles to the on-axis plane impinge on the edge of the diaphragm and have practically no effect on it as they apply pretty much equal pressure to both sides. So the figure-eight has the lowest off-axis sensitivity of any microphone and has no unwanted lobes.
In the studio and concert hall the figure-eight has along and illustrious history, but in the open field it's really restricted to a single application - mid-side recording. This is a dual-microphone configuration that allows maximal adjustment of the stereo image in post-production, allowing huge latitude when setting recording levels. It's therefore useful when aiming to record unpredictable transient events or in arduous conditions that preclude setting up in advance, but it does have limitations, notably absence of timing and phase information in the recording. The resulting stereo recordings often sound marvellous through headphones but can be rather lacking in spatial quality via loudspeakers.