The shotgun or rifle microphone is an extreme example of the standard cardioid implementation. To achieve the extremely narrow field, the sound waves are conducted through an array of slots in a long tube - the interference tube - to the back of the diaphragm. This gives the shotgun microphone its familiar appearance. 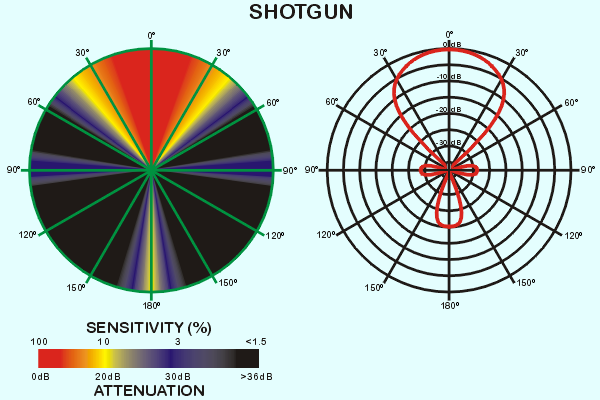 The shotgun microphone is typically used on film sets and for outside broadcasts, where it is used singly on a boom for near field recording of individual speakers. It's difficult to use shotguns in a stereo configuration for several reasons. Firstly, the polar pattern is very frequency dependent, so "holes" can appear in the stereo image at certain frequencies. Second, it's difficult to position shotgun microphones in the requisite configuration for stereo. The active length of the interference tube is often comparable to the spacing of a configuration such as ORTF, and this can cause unwanted interactions, so the only safe configuration is usually coincident pair. To achieve this, a very long and inconvenient microphone bar is needed.
However the overriding argument against using shotgun mics for stereo recording is that because they are so directional, the sound field is correspondingly narrow. When a recording of such a narrow sound field is replayed on a standard stereo speaker system the sound field is stretched because the angle between the speakers is greater than the angle between the microphones when the recording was made. This typically results in the sensation of "a blackbird ten feet wide." Attempting to compensate by increasing the angle betwen the microphones results instead in a quiet spot in the centre of the sound field.
Shotgun microphones are very directional at medium frequencies, notably the 1-6kHz range that predominates in human speech. But at lower frequencies they can pick up more unwanted sound from behind than a standard cardioid, and at frequencies in the top octave - 10-20kHz - their response is often very lumpy, with multiple lobes of higher and lower sensitivity. They also have side lobes that can be troublesome. Consequently they are difficult to aim unless held very close to the sound source and are not ideal for recording bird song.